"What godforsaken planet have we landed on this time?" Patrick moaned.

"If you paid attention," Bethany admonished, "you'd know this is Kepler-1708 b-i, an exomoon."

"A moon? It's all gas aaaand bigger than Earth, stoopid." This was Patrick trying to be clever. #Fail

"Patrick," I said, trying to remain objective, "Between planets, how many years have we been cryogenically frozen, having the latest scientific gen streamed into our brains?" 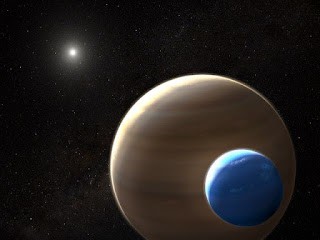 "A thousand?" he shrugged.

Beth and I look at each other, incredulous.

"No wonder I'm starving," Patrick said, wandering off deeper into the protective dome that our ship had cast over the exomoon's immediate rocky interior.

"Trish, why didn't we jettison him over Gliese 876d?" Beth asked.

"Hello - it's a dome. Your voice carries in here," came Patrick's echoing whinge from behind whatever craggy outcrop he was now bothering.

"Rules is rules, kid," I answered. "Unless he puts us in mortal danger, he stays. He's the admiral's nephew, after all."

"Privileged posh boy's what he is," she said.

"Guys, look what I've found," panted Patrick, shuffling towards us holding something wriggly between his fingers.

I'd been gone two seconds when I heard Beth ask, "Are you going to eat that?"

I pirouetted to see Patrick holding the wriggly thing over his open mouth. But behind him loomed a colossal wriggly thing, obviously related.

"Mortal danger?" I asked Beth. She nodded like her head was on springs.

Whether the giant wriggly thing or the pressure once we'd retracted the dome got Patrick first, we'll never know. Next stop, freedom!

"So, Daniel," the vampire mused, "Vot iss it you think you can offer me?"

I waited 'til he'd finished chuckling; I had little choice, limb-bound as I was to a huge candle-lit altar.

"Power," I said, prolonging his chuckling fit, "and all I ask is that you make me immortal."

"But, Daniel, I haff all the power I need. The night belongzz to me!"

"Yes, but what about the daytime?" I countered, trying to hide my desperation.

"Vot good iss that ven I could neffer reffel in that power?" 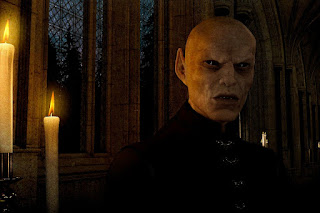 He was toying with me.

He wanted something; I'd be dead already if not.

I had to guess what, tested, like many probable others before me.

"Safety, during daylight hours," I said, leveraging the longing in his last response.

That was two clues; was he purposefully dropping hints?

"What if someone — me, for example — could vet your victims during the day: high flyers, influencers, the deserving?" I asked.

He smirked; I was getting warmer. "Go on…" he said, suddenly wistful.

"Your feasting would no longer be limited to society's dregs: the winos, druggies, the bereft and pitiful," I said. "I could deliver you a, well, richer diet."

"You'd betray your peerzz to me for immortality?" he asked, knowing I would. "You should be ashamed."

I shrugged, as much as my bonds would allow, and asked, "When do I start?"

My bonds snapped, seemingly of their own volition.

"You haff von veek'ss trial," he said, disappearing through an imperceptible doorway. All that remained to prove he'd been there was the echoing, "Shut the door after you."

I guess I was hired, then. Time to start a recruitment drive of my own!

Jez and Carlotta were, technically, in the wilderness at Pine Bungalows, Jasper, Alberta. But with a golf course overlooking Beauvert Lake opposite, gentle hikes nearby and skiing at Marmot Basin, their three-month escape was hardly 'Bear Grylls.'

Today, though, it felt like they'd been here forever.

Six weeks into their stay, Jez had fished an eldritch, piebald sculpture from the depleted Athabasca River, near Horseshoe Lake. Ever since extracting it, someone had been murdered at that exact same time every week. 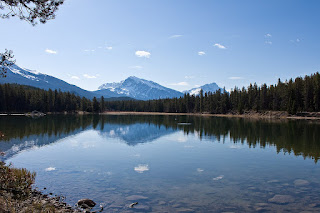 The first murder transpired almost six weeks ago, at Horseshoe Lake, some half hour's drive away.

The second was closer, inside the Wabasso Campground.

By the third murder, closer still at Valley of the Five Lakes, he and Carlotta could no longer shirk their connection.

Murders four and five followed like clockwork, at the Jasper Water Treatment Works and Planetarium respectively.

Their map clearly showed the killings' nearing proximity. Someone (or something) seemed hellbent on reclaiming the statuette, heedless of consequences.

They sat clock-watching in silence. In two hours, it would be the six-week anniversary…and another murder.

"What you gonna do?" Carlotta asked

"Go now, you'll be back in an hour," she added; he sighed, resigned.

Jez made good time, laid the statue in the reeds, even WhatsApped photos as 'proof'. But he couldn't resist, capitulated, and hid it inside the car boot.

It wouldn't hurt; another week, they'd be home.

But when he arrived back, the cabin was a bloodbath; Carlotta's sundered cadaver plastered the walls, furniture, floors, everything.

Grief-stricken, he rushed outside to the car. The boot stood open, spare tyre shredded and the statue gone. There was no seventh murder.

Body in the Fountain (Flash Fiction)

Preston strained his eyes through the ninth-floor window; without his spectacles, it was a futile exercise. He could, at least, imagine hearing the tinkling trickle-spatter of the spouting, regurgitated ice-cold water.

Moonlight flecked the dappled surface making it seem, from up here, as if the body in the pool was scouring the bottom for wished-upon pennies, a missing snorkel the only hint to the contrary.

Still, that semblance of mobility unsettled Preston. Glasses. He must fetch his glasses. 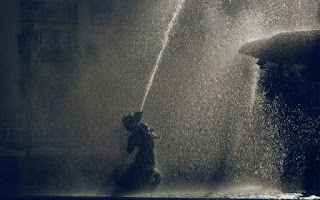 He returned from the bathroom in haste, wiping the blood from the lenses with a scrunch of toilet paper.

Now the scene below had edges, came into focus.

For two minutes he watched, unblinking.

The body remained face-down, its bloated clothing waxing and waning in the moonbeam-kissed ripples.

The twin fountain heads were now, he noticed, spouting pink-tinged water, an oddly similar colour to that of the few remaining droplets on his lenses.

No. The bell-ringer was dead.

To be certain, Preston waited until 1a.m. Then a minute past, two, five.

No, nothing; silence reigned. He sighed, and resumed undressing for bed.

It was, he pondered, amazing the lengths to which a sleep-deprived man would go to get a decent night's sleep…

This week:
Your character - from his high up window - sees a corpse floating in the famous Michgail fountain. Things are not what they seem.

Fancy a punt? Awesome. Head on over to the Authors of the Flash Fiction Writing Challenges Facebook Group and join in! See you on the outre side.

If you like the wit and humour of Terry Pratchett's Discworld, then you'll love The Silk Thief.

The Silk Thief, The Blurb: 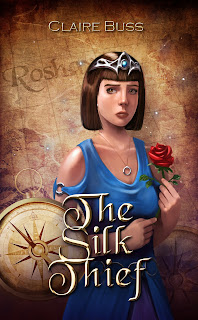 Fourteen, heir to the Empire of Roshaven, must find herself a new name before Theo, Lord of neighbouring Fidelia, brings his schemes to fruition.

Not only has he stolen Roshaven's trade, but he plans to make Fourteen his own and take her empire in the bargain.

Her protector, Ned Spinks, is plagued with supernatural nightmares whilst his assistant, Jenni the sprite, has lost her magick.

Can they figure out how to thwart Theo's dastardly plan before it's too late for his city and her empire?